How To Get 144+ FPS in Call of Duty: Warzone and Gain a Competitive Edge

Call of Duty: Warzone has quickly become one of the top-played games on PC in the weeks since its release, with over 50 million players to date. This free-to-play title features dynamic and frantic battle royale gameplay with up to 150 players on the largest Call of Duty battleground ever.

Call of Duty: Warzone puts a new spin on massive combat arenas by taking the difficulty away from looting, while giving you new missions to complete during the course of the battle that reward aggressive play and map traversal. And the fight doesn’t end once you die. Even if your teammates are unable to revive you, you’re placed in the Gulag where you compete one-on-one with another fallen combatant for a chance to respawn with your squad. Whether you are in Verdansk or in the Gulag - high FPS unlocks your potential and increases your chances of hitting that game winning shot.

The firefights in Call of Duty: Warzone can end in the blink of an eye, so making sure you have every possible advantage is vital. Whether you’re a seasoned pro or a newcomer to the battle royale genre, high FPS gameplay grants you several benefits.

Why High Frames Per Second (FPS) Matters when Playing Call of Duty: Warzone

In Call of Duty: Warzone, player movement is fast. Whether you are holding the angle or peeking a corner, high FPS paired with a high refresh rate display provides improved clarity and comprehension when it really matters. Additionally, the smoother motion provided by the increased frame rate allows you more opportunities to correct your aim - making it easier to track those targets as they sprint by. At 240 FPS/Hz you are given 4 times the information with 4 times the opportunities to make micro-corrections to your aim over 60 FPS/Hz!

In the heat of the moment, being reactive is critical. Sifting through distracting effects like tearing or ghosting takes precious milliseconds and can impact your ability to perceive the situation correctly. High FPS on a high Hz display significantly reduces these distracting effects by decreasing the size of the ghost trail and tear displacement. Reducing distracting effects ensures you are actually aiming at the right thing.

When milliseconds matter, seeing your opponent a split second earlier can give you an advantage in a fight. Higher FPS reduces the overall system latency of your computer which means your actions and the state of the game are displayed on your monitor faster. Lower system latency helps improve your reaction times and makes input feel snappier - critical for a fast paced game like Call of Duty: Warzone.

For more information on why high FPS matters, check out our in-depth technical article, “Why Does High FPS Matter For Esports?” 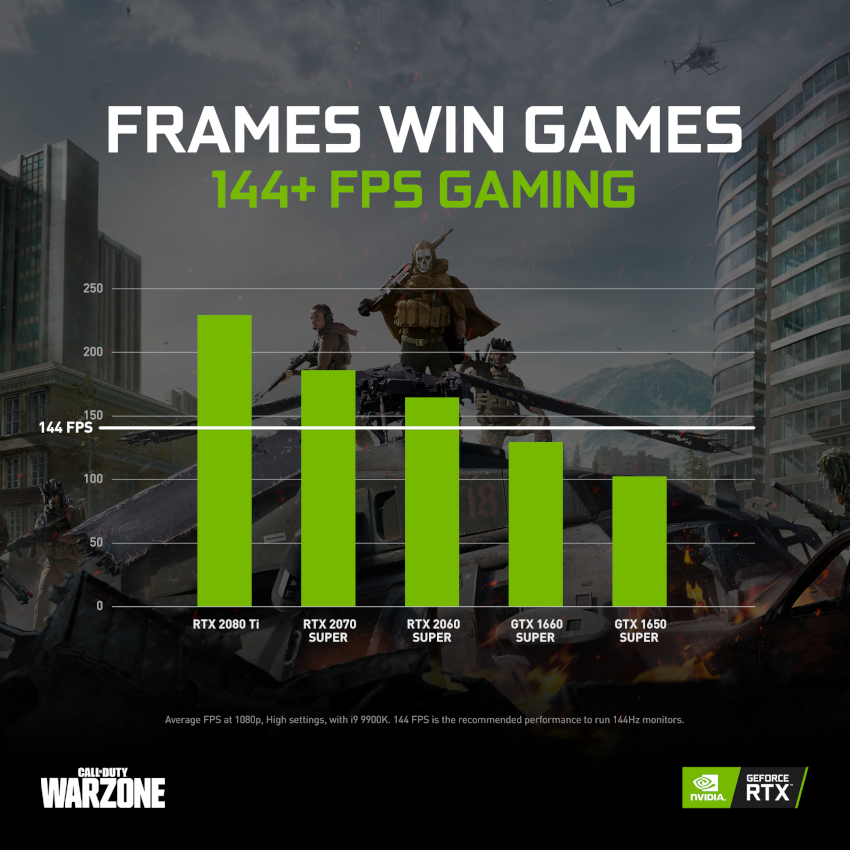 When all of the available information is looked at as a whole, we can conclude that there is a strong correlation for higher FPS helping maximize your potential in battle royale games like Call of Duty: Warzone.

For more on High FPS gaming, check out our FramesWinGames page.

View as Grid List
Sort by
Display per page